I have made all my Log Cabin squares and am now starting to join them together so I decided to do a quick tutorial on my favorite way of joining granny squares (of course, it took much more time than I had hoped!).  I am hoping to be clear and keep it simple, as it really isn’t that complicated, but it is often easy to make things sound more complicated than they are.

My squares are going to be bordered with two rounds of gray, and I held off on that until I was ready to start joining, so the first thing to do is complete the border on the first square in order to have one to join to.   The rest I will join as I am doing the second (last) round of the gray border.  (The photos show more than that joined together already). To help make it easier to see, I am doing the last round on this demonstration one in pink instead of gray.

I begin the joining in the corner, so crochet your last round up to the corner ch3 space, 3dc in the ch3 space as usual and then ch2 (I normally ch3 for each corner, this is one less ch, my attaching stitch will count as the 3rd).

Now you are going to sc into the ch3 corner space of the square you are joining to. Make sure you have the wrong sides together (in other words, the right sides are outward and the wrong sides are inward).  Once you have attached to the other square with the sc, continue on crocheting 3dc in the corner of the square you are crocheting the border of.

When the corner is finished, sc in between the next 3dc cluster of the square you are joining to. 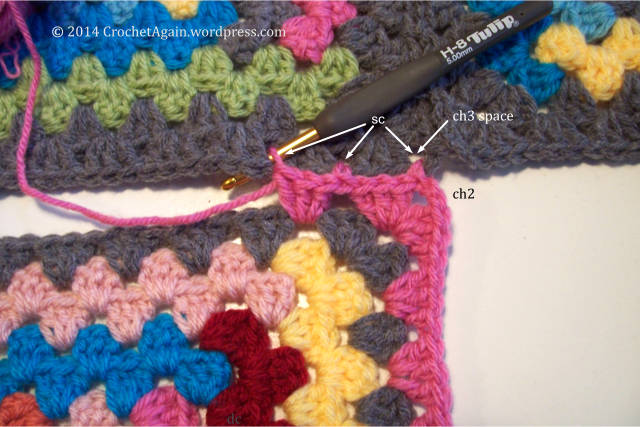 The 3dc clusters are going to line up against each other, the attaching single crochet’s go in between the clusters.  Continue along the edge, crocheting the final round and attaching to the other square with a sc after each 3dc cluster.  Watch carefully, it is easy to skip one as you are going along.

When you reach the other corner you are going to do it slightly differently then the first corner.  This time you will make the attaching sc and then ch2. 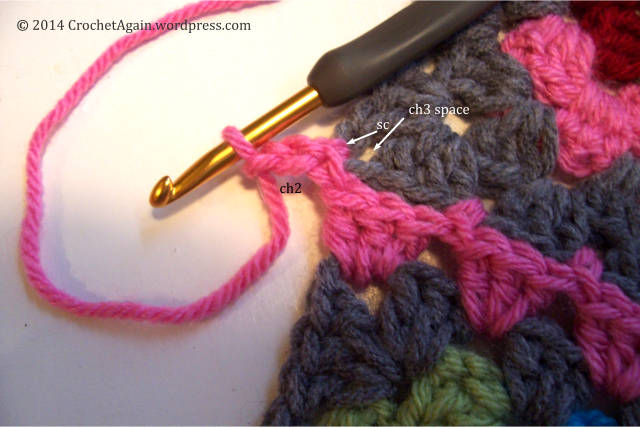 Finish the corner with remaining 3dc and then continue on finishing the final round of your square as usual….

Attach more squares into a row the same way, and attach the first square of the second row.  Now you will see that the squares are going to need to be attached on two sides.  Attach the first side as above.  The corner where all the squares meet will be done a little differently.

The diagonal square, the one that is already attached to two other squares you can just ignore, you aren’t going to do anything to that one. 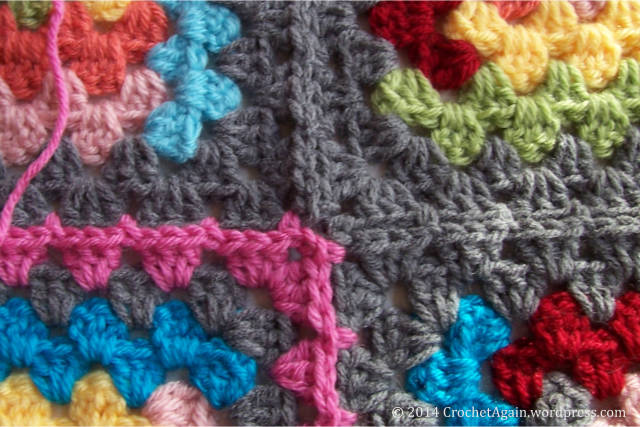 This next photo shows how it looks when in gray, if you look closely you can see where the sc’s are and the nice neat center meeting point.  I like using sc instead of a slpst, my slpst’s tend to be a little tighter, the sc just seems to work better for me.